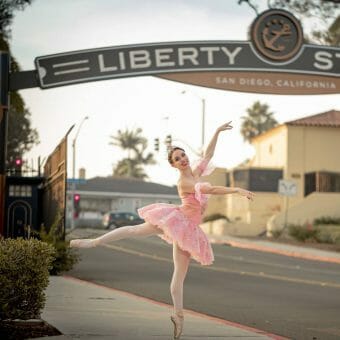 This year has shaken up any sort of regularity in which we are accustomed, especially for those whose livelihoods are in performing arts. Anyone in the ballet community can attest that the holiday season begins around August, when ballet companies begin to prepare for the year’s live production of The Nutcracker. Albeit, the 2020 season looked dramatically different, San Diego Ballet (SDB) is determined to bring a sense of normality during these trying times with a “drive-in” version of The Nutcracker.

Principal dancer for SDB, Stephanie Maiorano, who will reprise her role as the Sugar Plum Fairy this year, has been doing The Nutcracker for the entirety of her 30-year ballet career. She said fall is usually a time for “Nutcracker madness–three months of just Nutcracker, Nutcracker, Nutcracker.” But since Covid has forced a major reworking of the production, full rehearsals will not start until the week of the show.

For students of the San Diego Ballet School,The Nutcracker does not just stand for holiday tradition, but as a yearly mark of growth in their aspiring dance careers. Moreover, it is a symbol of unity between the school and the company.

The end product will be a surprise for the dancers and audiences alike, however, Maiorano affirmed that if anyone could make a live performance of The Nutcracker feasible in the era of social distancing, SDB’s Artistic Director, Javier Velasco, is that person. She said that he is “particularly great at maneuvering around any kind of issue.”

So how will this typically large-scale production transpire exactly? “As I was looking at the possibility of doing The Nutcracker, I had to take a hard look at ‘who was in whose’ bubble,” Velasco noted. “Luckily, we have married couples, roommates and friends that made natural groupings, that fell naturally into parts that they would have normally performed in the show.”

In order to carry out ensemble numbers such as the “Snow Scene” and “Waltz of the Flowers,” those will be performed by company members within the same bubble. Kids participating in the show will be choreographed a safe distance away from one another. A portion of Liberty Station will be converted into an outdoor auditorium where the matinee performances will take place.

“Because of the drive-in concept, we are doing an abridged version of the show,” Velasco continued. The stage will be smaller than normal “but everything that everyone is looking for in The Nutcracker will be there.”

Maiorano herself is married to fellow dancer and partner Tonatiuh Gomez, performing as her Cavalier. The duo have been able to make use of the company’s rehearsal space to practice their own part in the interim.

“Nutcracker is not personally one of my favorite ballets but I would rather it be Nutcracker than be nothing,” Maiorano admitted. “You can’t compare to seeing a live show and that’s something that people are missing so much right now,” she added.

At the end of the day, the dancers are all dying to dance on a live stage again. Moreover, the San Diego Ballet felt they owed it to the community to still give them a semblance of holiday tradition, despite the pandemic.

“Yes, all of the online programming is wonderful, but sometimes a family needs to take the kids out and do something special for the holidays,” Velasco pointed out. Maiorano added that “it’s been such a tough year for so many people, to be able to give them this, in whatever capacity that we can, I think that’s really important.”

The San Diego Ballet is known for its cutting-edge genius; this unique “drive-in” approach to Nutcracker is not simply an accommodation of the circumstances but arguably a necessary revamp of a work that was getting formulaic.

“I am absolutely sure that years from now,” Velasco posited, “the dancers and audience will perhaps blur memories of Nutcrackers they have seen during the years, but that the Drive-In Nutcracker will always stand out in their minds as a joyful experience in a difficult time.”