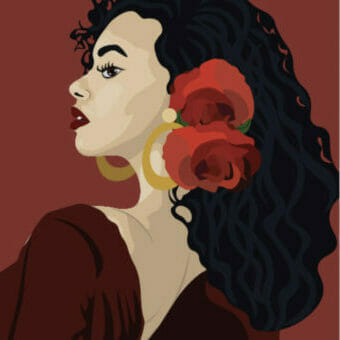 Bizet’s “Carmen,” taken from the French writer Prosper Merimée’s 1845 novela of the same name, is probably one of the most beloved of the great operas, with its rousing tale of a Spanish soldier besotted with a fiery gypsy (Roma woman), its demanding (and commanding) arias, exotic-sounding rhythms, and a finish that crushes romantic expectations.

Done well, it’s exhilarating.  Done badly, well, it’s disappointing. To succeed, the leads need to be impeccable, the orchestra on cue and on its toes.

The Pacific Lyric Association ’s choice of “Carmen” to open its season is a bold one. This 2022 Carmen, which closed out the beginning of the season at the Joan Kroc Theatre in San Diego, more than delivered the voices and the music, but felt a bit short on the staging.

The PLA made some interesting choices in its staging of one of Bizet’s most challenging works. Instead of projecting translations above the stage, the production opted to have the male lead character, the Spanish Soldier Don Jose, summarize the main events to come in English. Older than the Don Jose involved with Carmen, this version, masterfully delivered by stage director Gabriel Reoyo Pazos, looks back on his life, his love of Carmen, and his many regrets as he narrates the coming action.

Despite the somewhat lackluster set, the voices were glorious. Anna Pflieger as Carmen, was in tight command not only of her stunningly rich voice but, also, the ornamentation, especially on “La Habanera” which trips up a less experienced and flexible singer.

In a younger incarnation than the on-stage narrator, Don Jose (sung by Alexis Alfaro), was delivered with a beautifully smooth generous tenor and a masterful presence on stage. Dr Joshua Wentz was a solid Escamilo (baritone), the bullfighter and Carmen’s eventual love interest, although he could have put on the swagger a bit more to explain Carmen’s emotional switch.

Chelsea Seener as Micaela, was solid and appropriately plaintive as the good girl turned aggrieved spouse of Don Jose with a clear tone and lovely phrasing.

The chorus was also excellent with some glorious voices and well-tuned ensemble work.

“Carmen” is traditionally sung in the original French and the only distraction in this production was the pronunciation. A number of the main parts were sung with pronunciations that hinted at greater experience singing in Italian and/or Spanish.

A rarity among conductors, it was a pleasure to see musical director Alexandra Keegan conducing the orchestra with such a sure hand. The orchestra was beautifully paired with the production and while the horn section was strong, it was well matched to the singers.

While a bit out of the way, the Joan Kroc Theatre was an unexpectedly well suited to a production of this magnitude. The sight lines were excellent for both the upper and lower seating and the acoustics were equally good, with everything crisp and clear and full.

The Pacific Lyric Association continues its season with its Youth Symphony Mahler Program January 13, 2203 in Escondido.