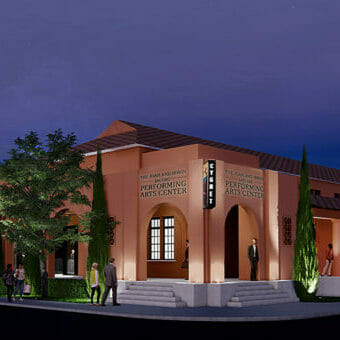 Cygnet Theatre was named after England’s Swan Theatre, an Elizabethan competitor to William Shakespeare’s Globe Theatre. In 2003, Cygnet co-founders had ambitions to rival San Diego’s Old Globe Theatre in “quality and heart.” However, being small, they chose the name of a young swan: the cygnet. At the time, Old Globe founding director Craig Noel laughed along and gave his blessing.

Theater planning and design for The Joan and Irwin Jacobs Performing Arts Center is led by Fisher Dachs Associates, the firm behind the design of the Old Globe’s incredible Sheryl and Harvey White Theatre. The pedigree is no surprise as, since San Diego REPertory Theatre’s suspension of operations earlier this year, Cygnet is the city’s third-largest theater company. It continues to be run by the tenacious, experienced leaders who chose the swan moniker: co-founders Bill Schmidt and Sean Murray.

Executive Director Schmidt is a former software development director for Peregrine Systems who holds a BS in Computer Science and Mathematics. Also, Schmidt is married to Murray.

Sean Murray is a local-boy-makes-good poster story; a Poway native who spent his teen years working at the box office of the Old Town Theatre. He earned his first professional acting job from Sam Woodhouse at the San Diego REPertory Theatre before earning a drama degree. He served as artistic director at the North Coast Repertory Theatre from 1998-2003 and, in 2005, a mere two years after starting Cygnet, he was named Producer of the Year by the San Diego Critic’s Circle.

The partners’ production prowess is clear in their season planning; nearly half of Cygnet’s productions are local premieres, some boasting Broadway accolades and a few world premieres by San Diego playwrights. Their bolder choices are balanced with “beloved classics and musicals” (AKA a lot of Sondheim and an annual production of A Christmas Carol) for a rounded-out subscriber experience that appeals to a wide audience of single-ticket buyers. Through this formula, Cygnet quickly outgrew their first home, a 165-seat theater located in a strip mall (now home to MOXIE Theatre). In 2008, Cygnet moved to the 246-seat Old Town Theatre, where Murray once sold tickets.

The groundbreaking of their next space is scheduled for the spring of 2023, with the center opening in late 2024. It will be roughly four times larger than their current home, with two theater spaces – one 289-seat proscenium theater and a 150-seat flexible studio space – as well as dressing rooms, two green rooms, a costume shop, dedicated rehearsal, and orchestra spaces. Audiences can look forward to indoor and outdoor lobbies alongside the plentiful parking and many dining options within walking distance.

Cygnet’s current success in the tourist-heavy historic Old Town San Diego bodes well for its future in the busy Liberty Station. Under the care of The NTC Foundation since 2000, the ARTS DISTRICT is home to over 90 galleries, museums, music groups, dance companies, creators, and distinctive dining experiences. Additionally, it shares the area with The Rock mega-church, shopping, and multiple schools for a multi-use neighborhood which will require Cygnet’s strategically diverse programming. (I expect more Sondheim.)

The true test of Cygnet matching The Old Globe’s citywide impact will be Schmidt and Murray’s stewardship in supporting the next generation of theatre. This sentiment is shared by the namesake patrons of the state-of-the-art center, Joan and Irwin Jacobs.

“Joan and I are thrilled to help provide this new performing arts venue in San Diego – especially one that is both a well-conceived conversion of a historic Navy building and located adjacent to the Gary and Jerri-Ann Jacobs High-Tech High School,” said Irwin Jacobs, a Qualcomm co-founder. “There has been a long-standing need for a live performance space for the many artistic groups and students in Liberty Station and we’re especially excited that this will provide Cygnet Theatre with a permanent home well-attuned to their needs.”

Cygnet will own the property lease once the renovation is complete but under terms to collaborate with Liberty Station’s dance and other performance companies for a combined total of 90 days each year.

Murray stated, “In addition to being Cygnet Theatre’s new home, we are looking forward to opening our doors to other community performing arts organizations as an accessible space.” This promise is underwritten by Cygnet’s history of hosting all-city auditions, renting their space, commissioning local playwrights, hiring student designers, and often casting local actors.

In much the same way that the Elizabethan golden age of theater was spurned on by competition between The Swan Theatre and The Globe, we look forward to San Diego benefiting from the not-so-fledgling Cygnet taking higher flight.

P.S. Does anyone know what happens to The Old Town Theatre lease when Cygnet leaves? Will Moxie draft off Cygnet again and move into the 92110?!? E-mail me your rumors!