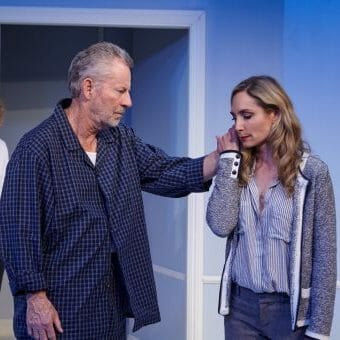 The critically-acclaimed and internationally renowned 2014 play, The Father by French playwright, Florian Zeller, made its West Coast debut this past Saturday night at the North Coast Repertory Theater in Solana Beach. Winning the Moliere Award in 2014 and both the Olivier and Tony Awards in 2016, The Father, translated by Christopher Hampton, has obviously had a significant effect on the rest of the world. Director David Ellenstein found the story’s perspective unique, fresh and engaging, knowing half-way through reading it that he wanted to do it. “It’s our responsibility to do plays like this,” he said.

Having now seen the play, I feel as though I am a part of some really great inside joke. This one-act dramedy is told through the erratic perspective of its central character, Andre, who is, for lack of better words, losing his marbles–or leaves. Initially, the non-sequence of events seems downright confusing. As Andre’s memory gets spottier and the world starts to make less sense to him, Andre’s world begins to make more sense to its onlookers.

On casting the lead, Ellenstein was looking for “someone who had great facility; somebody who had enough charisma and presence to carry the play […] somebody who was not going to be afraid to go to the places that Andre goes to.” James Sutorius as Andre is absolutely sublime. His comic chops often resemble those of Mel Brooks. His ability to emotionally flip flop in a matter of seconds is frightening.

The Father is a nonlinear, Pinteresque comedy of menace, that anyone who has had any sort of relationship strife with their parents can relate to. “Even though there is a lot of mystery along the way, you, as an audience, are left with something very specific, something universal, something that touches your heart in a way that is clear,” noted Robyn Cohen, who stars as the emotionally worn down daughter, Anne.

The play itself is a piece of literature to be admired. But a great play is nothing without great actors to carry it. Or a divine director to bring that greatness out. The stunning Cohen is a perfect foil to the charismatic Sutorius, both of whom made their NCRT debuts in this production. The rest of the cast, Matthew Salazar-Thompson, Jacque Wilke, Richard Baird and Shana Wride, whose roles I cannot disclose without spoiling the surprise, are like critical blocks in a game of Jenga.

What made Ellenstein’s interpretation so special, Cohen commented, is that this venue begets the true kind of intimacy the play needs. Ellenstein, too, added that NCRT’s small space allows the audience to get more involved. Although I have no other experience with this play to compare it to, I can attest that the small venue truly compliments the play’s fine acting and stage direction. Being able to see each facial expression vividly or feel the room shake as Andre yells out “It’s difficult to explain!” enables an undeniable sense of authenticity. You can tell each emotion is really being felt.

The Father tackles a scary–but immensely relevant–topic, from both the parent and child perspective. The process of getting older, in general, can instill a significant level of fear at any age. But the idea of having to take care of a parent, let alone one that you don’t get along with is even more unsettling. It’s easy to dismiss Anne as unsympathetic and cruel for wanting to live her own life, despite Andre’s mental condition or tendency to clash with almost everyone. You can’t blame Andre for his emotional outbursts; you can’t blame Anne for wanting some distance.

At curtain call, as the actors took their bows, the audience members began to rise up, one by one, out of their seats. Just like popcorn, until the whole house was on their feet. It was the kind of response you dream of receiving as an actor and the kind of response you always wish to give as an audience member. The Father is a play that knows exactly when to be funny and when to be serious, with actors that know the power of spoken word and of silence, and a director who knows exactly how far to push the envelope. I left the theater wishing with all of my might that I could think of something to critique. I was promised something deeply profound, tragically humorous and emotionally rigorous that I wouldn’t be able to shut up about. I got exactly what was promised. Don’t miss this show.

The Father will be at the North Coast Repertory Theater until June 24th, visit https://northcoastrep.org/ for show times and ticket prices.