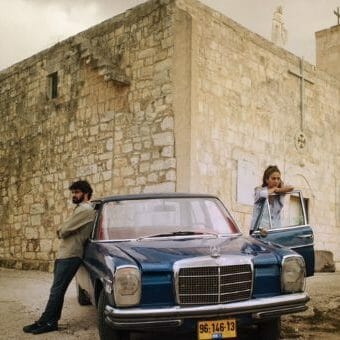 For a film festival to enter its 10th year under normal circumstances is not always a given, but to hit that milestone on the far edge of a pandemic, that’s staying power. And staying power is what keeps the San Diego Arab Film Festival coming back year after year with a slate that would put an arthouse cinema to shame.

This year, the San Diego Arab Film Festival (SDAFF) observes its 10th year in a hybrid form, starting June 5. Features are being screened in person at the San Diego Museum of Photographic Arts (MOPA) in Balboa Park, and an impressive line-up of shorts categories are on-line that you can screen at home.

Over the years, the SDAFF has screened films from across the Arab world- from Morocco in the west to the Gulf States in the east and various parts in between. Many of the films screened by the festival have won multiple awards but landed no distribution deals in the US. According to John Sinno of Arab Film Distribution in Seattle, one of the few companies to distribute films from the region, Arab films are a hard sell. “Many people are not open to foreign films…with subtitles,” he said in a prior interview about Arab film. According to Sinno, many viewers are not sure how to read the political and cultural messages. “After 9/11,” said Sinno, “there was a burgeoning interest but then there was a paradigm shift towards seeing the Middle East as either full of terrorists or refugees, and filmgoers may have become overwhelmed by the stereotypes.

This year, the SDAFF has sought to pull together a varied and impressive line-up that is strong on diversity and provides a timely, substantial nod to Palestine and what it is like to live under an occupation that restricts daily movements and which now blows up civic and cultural institutions as a form of group punishment.

The SDAFF opens June 5 with a beautifully crafted film from Palestine directed by Najwa Najjar. Between Heaven and Earth is Najjar’s third feature film and has been gathering substantial buzz both in international film competitions and in film festivals in the US.

Part road movie, part unravelling romance between two people who love each other, the film follows Salma and Tamer, a young Palestinian couple whose marriage, like the uneasy truce between the Occupied Territories and Israel, seems to be coming undone. As they start their application for divorce, a surprising family secret leads them on a journey through a minefield of allegations, checkpoints, state-ordered assassinations, and hidden histories regarding the missing children of Arab Jews. Between Heaven and Earth takes an unflinching look at the complexities of negotiating identities, residency permits, the daily nuances of living as an Arab -Christian, Muslim or Druze – in a land that knows them, under a government that would prefer not to.

Speaking to Vanguard Culture from her home in Palestine, Najjar said, “I hope people will really see this movie and enjoy it and enjoy the music and enjoy the couple and hear the narrative of the Other because in the end, you know, it’s really one of the few stories that brings out the Palestinian perspective, that connects with audiences.”

“Audiences for example in the US, are very important because they, too can say, these people don’t deserve to be under occupation, we shouldn’t give our money to have Gaza bombed, so it’s really great for them to see another side of Palestine and our stories and who we are, separate from mainstream media,”  added Najjar.

The rest of the features come from across the Middle East and represent work by both seasoned directors and newer filmmakers well on their way to making their mark.  Those films will be screening at the Museum of Photographic Arts, San Diego starting next week.

An interesting aspect of the programming is the highlighting of work for and by some of the region’s non-ethnic Arab minorities. Several films, including one from the Maghrebi Diaspora, Honey Cigar, by Kamir Ainouz, feature dialog in Kabyle, one of the Tamazight languages of the Amazigh, or Berber people  who are the original inhabitants of the region and are spread out across North Africa from Morocco to Egypt.

Other films include a new feature from Sudan, You Will Die At 20, about a young man whose family is trying to cope with a village sage’s prediction that he will die at 20, and a beautiful new film, Broken Keys, from up-and-coming Lebanese director, Jimmy Keyrouz, about a pianist in a Syrian town who needs to sell his piano so he can escape ISIS (Daesh) who have just banned music. Broken Keys was Lebanon’s official submission to this year’s Oscars.

The festival’s features are bookended by another Palestinian film, 2oo Meters by Ameen Nayfeh, screening June 12 and June 19. Again, 200 Meters examines what life in the Occupied Territories looks like for Palestinians who must cross into Israel to deal with basic necessities like medical care. Mustafa lives in Tulkaram, a Palestinian town a mere 200 meters from where his wife, Selwa, and their children, all Israeli citizens, live on the Israeli side of the Green Line. Although it may seem odd to non-Palestinians, many families are split this way because of residency and citizenship. Mustafa, a non-Israeli Arab, has an entry permit, but things come to a head when their son has an accident serious enough to land him in the hospital. When Mustafa goes to cross into Israel, he is told his entry permit is expired. How Mustafa solves his dilemma is both a road movie and a deep look at family dynamics in which love is the driving force despite the almost insurmountable obstacles the family faces.

This year’s SDAFF also features a well-organized shorts program that seems to have a little something for everyone. Grouped into six blocks, the shorts include Academy-nominated films, animation, and a surprisingly relevant documentary for the San Diego region, Haunted By The West, by American-Iraqi artist Michael Rakowitz. The documentary examines what happens when cultural treasures (in Iraq) are looted or left unprotected during an invasion such as the US invasion of Iraq or are destroyed by a group such as ISIS (Daesh) when it takes over a region. The shorts programs  stream on-line until June 19.

The SDAFF will be respecting Pandemic protocols, which means masks for the audience and a 50 percent seating capacity. Advanced ticket purchase is advisable because the SDAFF screenings are frequently sold out. Individual films are $15 (Discounted to $12 for students), 3-ticket packages for $40 and Festival passes for $60.