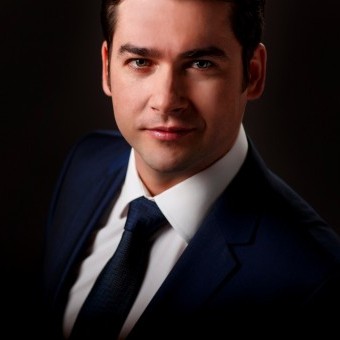 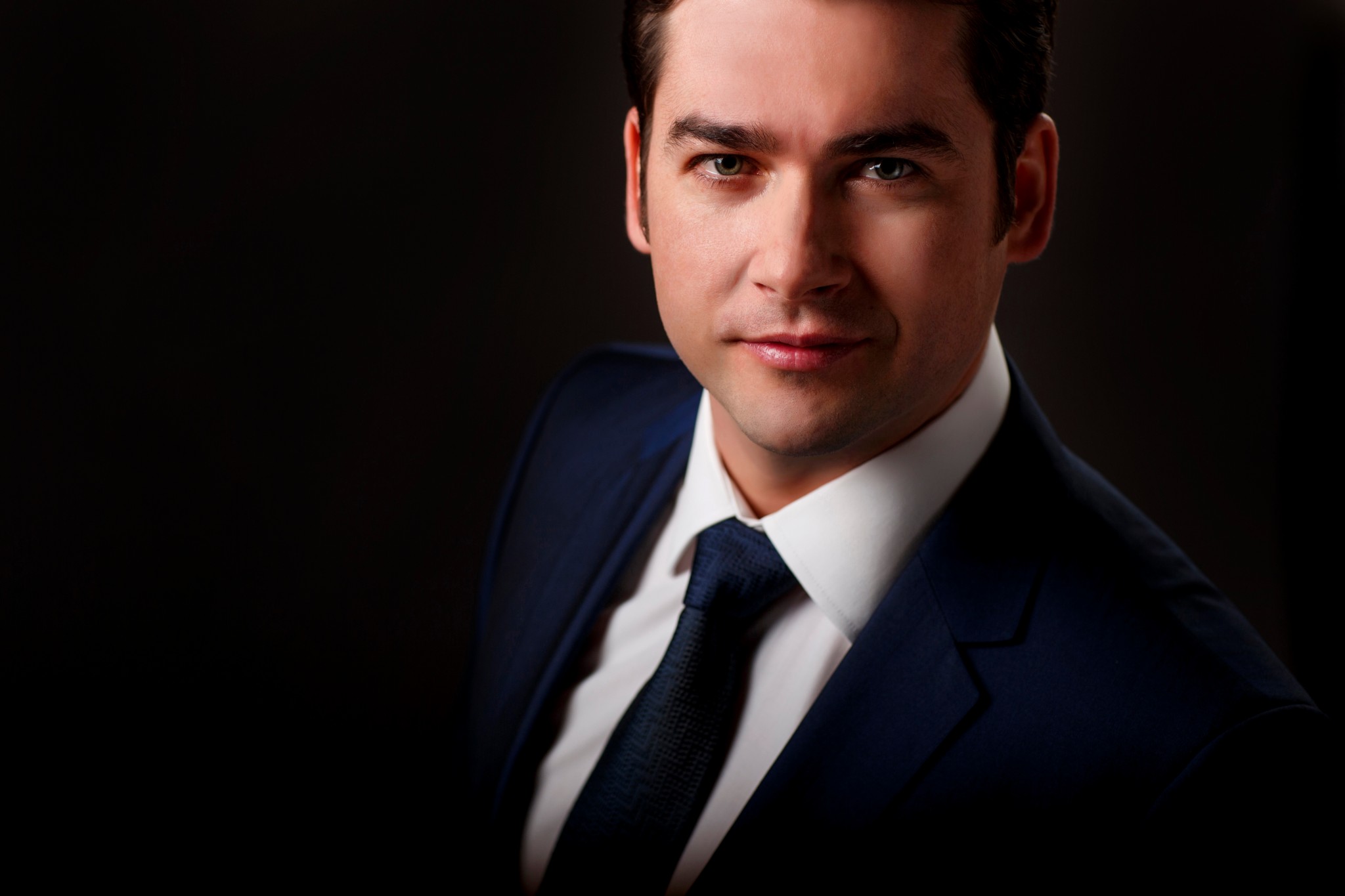 Teodor Ilincai is a well-known tenor opera singer who will make his United States debut at San Diego Opera’s upcoming performance of Madame Butterfly, opening Saturday April 16th. Currently working in Marseille, France made it difficult to schedule a conversation, so I emailed Teodor questions about his life and work. Rather than re-invent his words, I chose to present his answers the way he expressed them:

I was born in northern Romania in a small and charming town called Falticeni in Suceava county, a few miles from Malini, the village where my mom is from and where I grew up and had an amazing childhood.

I grew up in a very large musical family. To be precise, I have 9 brothers and 3 sisters. Being the last child, makes me the “13th”, my lucky number! They all sing for fun and play instruments, too, in fact I took my first harmonica, guitar, and mandolin lessons from some of my older brothers. Later, I learned piano, some traditional flute, and saxophone. We used to sing in our Orthodox Church, so step by step I got used to Byzantine music common among Greek Orthodox people – but my family also had a choral tradition. One of my brothers is a cantor in the church in my native village, and three other brothers studied Theology, two of them being priests. I am the only professional musician.

It was more like an accident, in fact two accidents…. The first came when I participated as a contestant on a television show during my studies in Bucharest Conservatory where I learned to dance, act and sing. Back then I liked to sing American Standards by Elvis Presley, Nat King Cole, Luther Vandross, Frank Sinatra, Roy Orbison, and Paul Anka. My favorite of all is Elvis Presley! A musical producer, Calin Marian, (may he rest in peace), felt that I had ‘something special’ in my voice and asked me to try some Neopolitan traditional songs. One song, “Time To Say Goodbye”, familiarized by Andrea Bocelli, brought me first prize when I sang it, and brought me a trip – surprise! – to Hollywood in 2003. The second “accident” was in my last year of musical studies, when I needed money like other students – so I got a job in the Bucharest Opera Choir. I felt I could sing better than some of the soloists and here I am!

Between high school and four years of studying oboe and music theory in Suceava Music College, I studied Philology (which deals with the structure, historical development, and relationships of a language). This enriched my knowledge about the world and improved my life. Next I went to the Conservatory in Bucharest where I studied Musical Pedagogy and Byzantine music. Let’s not forget my private voice lessons with my beloved Maestro Corneliu Fanateanu, who unfortunately passed away last year. I will try and share with the world everything he taught me about singing and living.

I have performed at the most important opera houses in Europe – in Vienna, London, Paris, Monte Carlo, Madrid, Barcelona, Seville, Berlin, Hamburg, Munich, Dresden, Lausanne, Marseille, Toulouse and others. At the beginning of my career, I was a full lyric tenor, which allowed me to perform Alfredo in La Traviata by Verdi, Romeo from Romeo and Juliet – Gounod, Faust in Faust by Verdi, roles which I don’t sing anymore because my voice has changed significantly. The only role, that of Rodolfo from La Bohème by Pucini, is one I will try and keep in my repertoire as long as possible as it is one of my favorites. I recently debuted as Mario Cavaradossi from Puccini’s Tosca and Turiddu from Cavalleria Rusticana by Mascagni, roles in which I feel very comfortable and brought me great satisfaction. The role of Pinkerton in Madame Butterfuly is one I enjoy as well. In the next few years I will have debuts as Verdi’s Don Carlo and Manrico from Il Trovatore. Another role close to my heart is Lensky from Evgeni Onegin by Tchaikovsky, which is, in my opinion, a role suitable for smooth-spinto voices (and not for a lyric tenor, like most of the opera casting directors are used to choosing) because of the intensity and drama of this unique character. I hope to have the chance to sing it again sometime soon.

I’ve been singing religious Orthodox music all my life, but also jazz, soul, blues, rock, pop-rock and rock n’ roll. I was a member of different choirs, whose approaches were from the Renaissance and Romantic periods. I have also sung Negro Spirituals, Romanian traditional and modern music. All those styles helped me to understand all kinds of music. Now I sing all this for fun, for myself and for anyone who comes to visit my apartment in Bucharest. Sometimes I go to church and sing with pleasure the Byzantine music I grew up with and trained for. As far as acting, I improve my acting directly on the stage, having played many different characters and I continue to learn so many things from the great directors I’ve worked with and continue to work with.

You will discover my singing while attending my performances in Madame Butterfly. I consider that I simply continue both Romanian and Italian singing traditions, ancient, but very effective – singing that I personally think is the ingredient that could save each and every opera singer in the world. I add some refinement, respect for the score, personal feeling and a piece of Romanian ‘deep soul’ and here you have the recipe!

Well, let’s call it challenging, as my agent Alan Green likes to say: “Say its challenging – not difficult, because if you say difficult you may block your brain.” The idea is to be balanced, to be conscious that we’re like athletes who need to train and have a well-ordered life: eat healthy, sleep enough, but managing to stay relaxed at the same time is challenging. Being away from home, traveling for long periods of time, can be painful since I love my country, but it’s a sacrifice all artists make. Also to make audiences happy is challenging – art is subjective. The best part is that I am doing what I love the most, and I receive appreciation.

I started studying this role on my own while in Barcelona playing in La Bohème in 2013. It was challenging because Puccini wrote the music for orchestra in such a powerful and dramatic way – you really need to be focused on giving your best, both vocally and interpretative. Then, the role is passing through all the registers of the voice – so its mandatory to have a strong technique and a Puccinian voice to achieve all the subtleties he wanted. Another challenge is that you have to keep your voice “alive”, warmed up until the third act, taking into account that Pinkerton doesn’t sing in the second act. I think I manage to solve all these challenges as I’ve played this role several times. I will rehearse in San Diego for about 2 weeks – I believe this is plenty of time to make everyone happy!

I’ll be in the USA until the end of April – I am happy to make my U.S. debut in San Diego, in such a great city! I will be singing Pinkerton again next season in two different productions, at Staatsoper Berlin and the Royal Opera House in London.

I’m 100% sure this production will be a success as I am a big fan of America and its accomplishments in acting, directing, music, entertainment, and visual art and opera is part of all that. As far as myself is concerned, I have come to learn that it is not healthy to underrate yourself so I say to all readers that they don’t know what they will be missing if they don’t come and hear me sing!

For more information or to purchase tickets visit: http://www.sdopera.org/season/2015-16-season/madama-butterfly