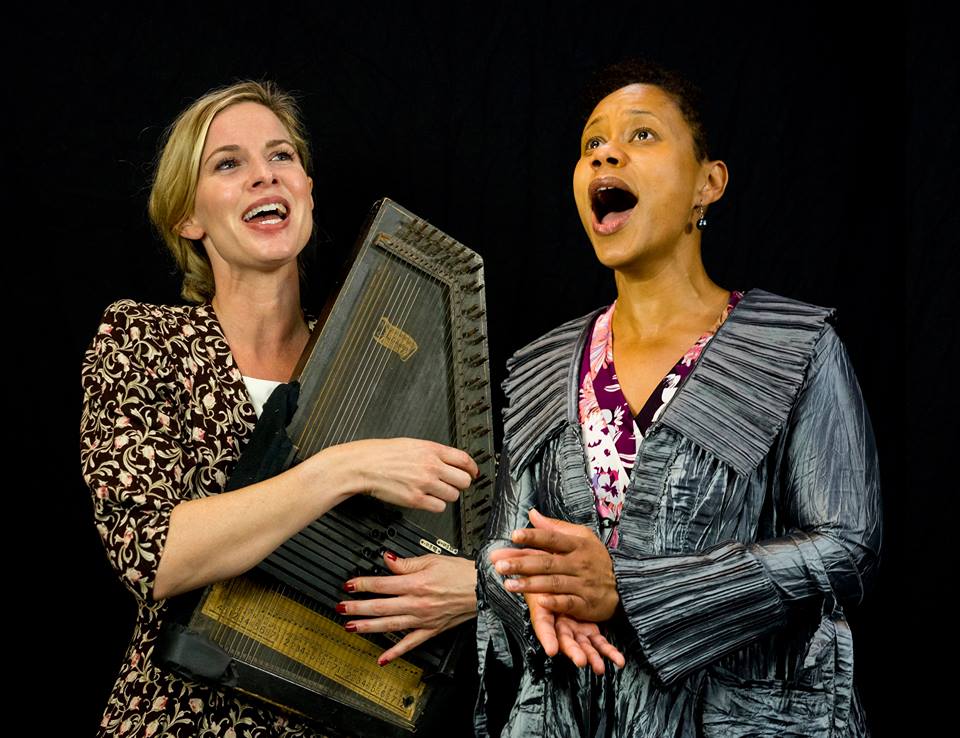 “A dangerous play that asks its audience not to just sing along, but to immerse itself in its own reckoning.”

San Diego theatergoers weary of profanity-laced plays in search of plot, character & dialogue will find Frank Higgins’ “Black Pearl Sings!” welcoming in word and action. Even better, in song, sweet song. The play is based loosely on the true account of Leadbelly, the released convict who went on to fame as the “King of the Twelve-String Guitar,” as accomplished through the efforts of Library of Congress folklorists in the 1930s under the New Deal’s WPA program. Setting the action in a Texas prison and New York City in 1933, the playwright turns history on its head by recasting the historical male figures as female characters. This gender-bending is just the play’s first blow against the empire.
.
Featuring a blast from the past of some of the “Greatest Hits of American Folk Music,” the play turns on the dueling folk traditions of white, privileged “Susannah Mullally” and black, imprisoned “Alberta ‘Pearl’ Johnson.”  Each takes her turn performing their favorite selections from the American Song Bag, as Susannah hunts for her ticket to academic stardom among Pearl’s repertory of slave-era tunes. Exchanging jibs and jabs like master chefs sacking the family cookbook in a cook-off, the two soon drop the recipes & begin ladling out dollops of their aggrieved pasts. The dialogue is sweet, sour, smart and saucy, but the singing is the thing that eventually draws them into a life-changing cultural encounter, culminating in a trip to New York City, where Susannah takes Pearl on parole to perform for the city’s best & brightest. There, Susannah surprises Pearl with a compromising request that leaves the audience gasping & wondering, “What did we just see?”  What I saw was a telling moment of truth muting the music of reconciliation sung so deeply before.
.
As Pearl, Minka Wiltz inhabits the role of the enchained and prison-striped inmate, whose body, but not her soul, bends beneath the weight of the chain gang. When Pearl sings, the line between performer and the self disappears in a chorus of acapella vocals that literally rattle the rafters and demand that the audience join in.  Happily, we do.  A show-stopping voice and presence, Wiltz makes Django Unchained seem tame. Given the dramaturgy of the play, which requires that Black Pearl sings while Oh Susannah just plays, Allison Spratt Pearce renders Susannah nimbly and sympathetically in a challenging assignment. Both spark the audience to rousing ovations.
.
The real genius of this play lies not so much in the music or the words, but in the props, which playwright Higgins turns into cultural artifacts. A cigarette lit but barely smoked, an autoharp, ladies trousers, bobbed hair, a prison uniform, a black neckerchief, a black box, a black statuette from the Congo, all speak as found objects from a benighted American landscape. Keep your eye on these pieces, not as things carried about by obliging actors, but as theatrical Amazon Echoes, not waiting to be spoken to.
.
There are caveats, not so much about the play itself, but because of the magnitude of the problems it illuminates. Higgins takes swings at everything from racism, gender equality, institutional elitism, cultural appropriation, and moral accountability. The writer cedes the moral high ground on each point to his characters. God is as light as an angel here, but appears powerfully and suddenly in the final scene, not as a terrible swift sword, but as a freshly washed, crisp, neatly folded black and white striped prison uniform, resting on the floor, stage front. Now chain gang chic, it has been borne soiled throughout the play by both Pearl and Susannah but comes clean only at this moment. It is America’s Shroud of Turin, bearing the impressions of many thousands done gone, in the name of an American ethos so battered it stands no longer on this American stage.
.
But the question still stands. Can the stain of generations be washed away in the laundry room of institutional awareness alone? Author Higgins says no, a deeper catharsis is necessary. This production is this season’s must-see entertainment, thanks to top-shelf production, authentic writing and memorable performances by two actors carrying a huge historical burden with great humility.  Black Pearl Sings! is also a dangerous play that asks its audience not to just sing along, but to immerse itself in its own reckoning.
.
–
Your Vagabond Bon Vivant
Philly Joe Swendoza