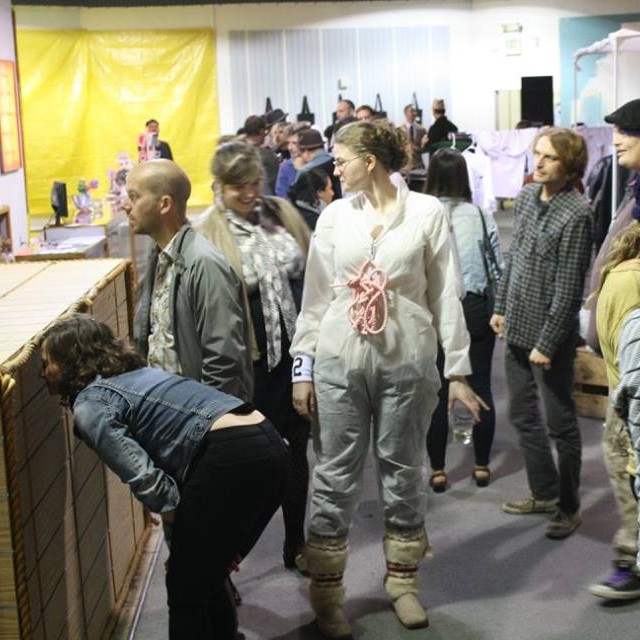 Date Night: This is SO Not The Mall

There is something about a Mall that just begs to be re-imagined. Temple to consumerism, the economic Pied Piper beckoning the faithful to follow, the Mall looms large in American Pop Culture.

It looms large as well for a group of mostly San Diego-based artists who decided to take on the Mall and turn the concept inside out with a mixed bag of installations, performances and interactive pieces called, “Date Night,” the second week of December, set in an empty storefront in the Horton Plaza Mall.

“Date Night” is the brainchild of Trevor Amery, Kim Schreiber, Morgan Mandalay, Seth Ferris, Jessica Frelund, Javier Fresneda, Dustin Brons and Audrey Hope, many of whom are connected with UCSD’s Department of Visual Arts, which provided part of the funding in conjunction with the San Diego Art Institute.

Participants included A Ship In the Woods, Space4Art, the Helmuth Project, and Untitled Space.

The show was amusing and ambitious. Billed as “an architectural venture based on Ray Bradbury’s essay, The Aesthetics of Lostness,” the show was somewhat overpowered by its own theoretical search for parentage. Some of the pieces were slight variations on themes already explored- surveillance at the mall – not really a new thought, and some of the vendors’ offerings were not too different from work that shows up at in pop up markets, silk-screened and drawn on last minute.

There were a few pieces that worked well, most notably, The Urban Colonies Carnival Game, by TARP Reform in which participants are invited to lob money towards holes and possibly win a mini-apartment. Like most carnival games and urban renewal, the odds are stacked against the participant- not a bad metaphor for what is happening to the East Village section of San Diego right now.

Another element that was striking were the spoken word, performance pieces ranging from spoken word- poetry in a converted dressing room, sound works by STAY STRANGE and assorted video pieces by Ash Eliza Smith and others. The Friends Collective contributed charming body as kinetic art/be your own cyborg interactive pieces.

As a concept, “Date Night” is fun, cheeky and VERY ready to take on the Mall. With a little less theory and a bit more thought as to what is being said and how, “Date Night” could turn into a very original event. One of its weaknesses is that many of the individual artists as well as some of the collective produce very interesting and challenging work on their own- very little of which was on display here. The show felt more like a toss-off- a pastiche of elements, techniques and materials, all taped together by theory. As it was, Date Night was well-attended fun, retreading a lot of obvious ground, -more like a pop-up version of a Thursday Night Thing with jello shooters- with the main goal to see and be seen.