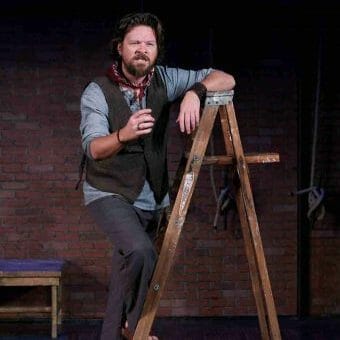 The North Coast Repertory Theatre has revived Lisa Peterson and Denis O’Hare’s An Iliad, a modern but faithful take on the old Greek epic, made more modern yet in this rendition by director David Ellenstein.

Richaird Baird plays an immortal rhapsode, straining to channel the tale of the Trojan war one last time, accompanied by Amanda Schaar on a cello as his “muse”, accenting his performance for its many moods. While there is some attention to the poetry, it is not a recital of Homer. Baird plays one of those poets from the oral tradition – perhaps even the tradition as it was prior to Homer writing it down – but in An Iliad, Baird’s character has become forgetful and even weary, and cannot channel it as he once did.

Rather than merely deliver a poem, he is desperate for us to understand the events and characters of the war as something entirely real, and strives to impart it to us in every available way. We’re left with a performance that dances through the whole production without any feeling of neglect for the essential parts of the story. Some details are skipped, others are painstakingly preserved in service to the pace and scope of the original work.

The play begins on a gentle, casual note, but with escalating intensity throughout. Baird brings an incredible amount of passion and energy to the performance as he raves with rage and despair, leaping off ladders and simulating brutal acts of war. It is a physical feat on his part. There is an improvisational element that leaves room for error, but nothing that could be clearly distinguished from the intention. It comes off as fitting for the orientation of the character: It is a struggle for him to retell this, and his success depends in part on the grace of the Muses.

An Iliad is presented as being not so much about recapturing Homer, but rather repeating the process – the poet here is channeling the events as Homer did, in his own way, for his own reasons. It is another telling of what happened at Troy, nearly as much about the teller as it is about the telling, and the teller succeeds in being both classical and relevant.

Don’t miss the final week of An Iliad, playing now through April 10th at the North Coast Repertory Theatre in Solana Beach.