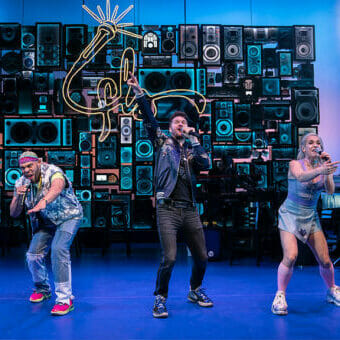 “An improv hip-hop show… at The Old Globe though?” My husband asked when I explained the concept of Freestyle Love Supreme.

He was surprised when I told him I was taking him to The Old Globe. In our dozen years of dating, I have gotten good at figuring out which shows he will like and that usually means bringing him to scrappier theatres like MOXIE Theatre or The San Diego REP (R.I.P.).

“It’s got pedigree,” I assured him, and – like everyone else – he recognized the name of that Hamilton-guy.

The fastest way to describe Freestyle Love Supreme is an improvised, free-style rap sketch comedy show. It won a special Tony Award in 2020 and was co-founded by Lin-Manuel Miranda. After finishing four months of Broadway performances earlier this year, the ever-changing cast commenced an 11-stop nationwide tour including performances at The Kennedy Center.

It is a rare move to show improv in a prestigious, large space. Improv comedy reached mainstream popularity thanks to shows like Whose Line is it Anyway? but each one of those 30-minute episodes is cut from hours of footage. Fans of the art form understand that live improv is a hit-or-miss grab bag; the flops are forgiven while the gems are treated as witnessing genius. Freestyle Love Supreme successfully ups the stakes and artistry by translating popular improv comedy games into hip-hop musical formatting deserving of a grand stage.

Audiences can expect a FLS cast of four-to-five to take audience suggestions and craft musical sketches with live musicians, live lighting, and a wildly talented beat-boxer. (Hats off to Kaila Mullady AKA Kaiser Rözé, the 2015 and 2018 world beatbox champion, who performed on Friday night’s show). Freestyle Love Supreme’s cast are top-notch performers and there were far, far more hits than misses.

My husband enjoyed the show. An older couple near us did not. I can’t know if it was because of the epic diss track on Justice Clarence Thomas (I attended the night Roe v. Wade was overturned, so there was a theme among audience suggestions and sketch messaging) or if the couple struggled to keep up with the loud linguistics. Either way, they were among a handful of walk-outs before the end of the 90-minute performance.

As a former marketing professional for the performing arts, it is a habit of mine at any production to count how many people of color or people under the age of fifty are in the audience. I rarely count more than a dozen and they are often accompanied by a Caucasian date or older companions. The Friday night performance I attended was hands-down the most diverse audience – in ethnicity and age – I can remember seeing in The Old Globe Plaza. While I would not take my theater-savvy great uncles to this one, I would definitely recommend it to those who love improv, new music, slam poetry, or a unique experience.

Freestyle Love Supreme runs through July 10, 2022. For more information and to buy tickets (starting at $52; guests ages 18-29 are eligible for $29 tickets via the Under 30 Discount program; check out special discounts for youth via the Tix4Teeens program).