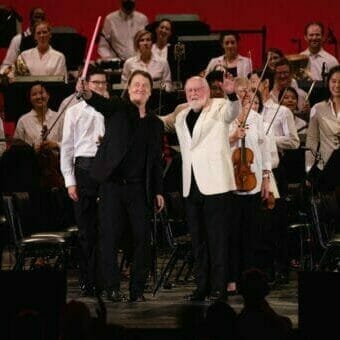 It is hard to overstate the prevalence of John Williams’ work and the impact it has had on (popular) culture. Consider this, Williams has been nominated for 52(!!) Oscars, behind Walt Disney’s 59, and won five.

Of these 52 nods, 17—and three wins—have been for his collaboration with Steven Spielberg. This partnership spans nearly 50 years and includes 29 films. Put differently, only a handful of Spielberg’s feature films do not have a John Williams soundtrack. Pretty good, for something that began as an awkward “blind lunch date” in 1972 when Williams was in his 40s and Spielberg was in his 20s.

But that is not all, Williams’ oeuvre also includes some other “small” hits that may sound familiar. All nine “Star Wars” films, including a special theme for “Star Wars: Galaxy’s Edge” (a.k.a. Star Wars land) at Disneyland. The first three “Harry Potter” films. The themes for the 1984 Olympic games in Los Angeles, “Olympic Fanfare and Theme;” the 1996 Summer Olympics in Atlanta, “Summon the Heroes;” as well as the 2002 Winter Games in Salt Lake City, “Call of the Champions.” The theme for NBC’s Nightly News, “The Mission.” (Listing things Williams has done over his extensive decades-long career is a little tiring. So, for those interested, here’s the Wikipedia page on his body of work.)

On a more personal note I played Williams’ music on loop especially when I had to write my master’s thesis, which had a film component to it. So, I jumped at the opportunity to see him in concert and took the train up to Los Angeles to take part in the experience. After all, he was instrumental in getting me through graduate school.

This was my first time at the Hollywood Bowl and the first time seeing the Los Angeles Philharmonic. But it would be my second time seeing Williams conduct an orchestra.

If memory serves well, that night Williams conducted “Rey’s Theme” from “Star Wars: The Force Awakens,” my favorite piece from the score. Listening to that piece live gave me chills, frisson, and there may or may not have been a tear shed. And for a fleeting moment, I was aware of how fortunate I was to be there experiencing such sublime sounds, which felt awe inducing.

A similar arrangement took place on Labor Day weekend at the Hollywood Bowl. David Newman, who has been somewhat of a staple the last few summers at the San Diego Symphony, conducted the first half of the concert.

During this part of the evening, Newman conducted the score for a range of compositions and the accompanying video clips were projected onto the screens. Such pieces included excerpts from the 1950 film “Sunset Boulevard” and Warner Bros. 1959 “Baton Bunny,” the latter of which was met with delight and uproarious laughter from the audience.

Before heading into intermission, Tom Hooten, the principal trumpet played “With Malice Towards None” from Steven Spielberg’s 2012 “Lincoln.” And Newman closed his portion of the evening by conducting the “Flying Theme” from “E.T.” It was this final piece that brought up that feeling of awe once again right after the percussion and the string crescendo.

While awe made an appearance, frisson did not fully arrive. It snuck up on me a few times, but once I was aware of it the feeling subsided. It was rather strange, akin to a yawn or sneeze that feels impending, yet will not materialize. Most of my evening was like this.

Post intermission, Williams took the stage to raucous applause and led the Los Angeles Philharmonic. For his portion of the evening, Williams only conducted pieces from his own catalog, all were met with glee. He started off with “Olympic Fanfare and Theme.” A rather fitting start since he composed the piece for the 1984 Olympic games in Los Angeles.

Seeing how Los Angeles is hosting the Olympic games for a third time in 2028—becoming the third city to do so—and Williams’ role in US Olympic lore, one cannot help but wonder: “Will John Williams be asked to compose a theme for the Games of the XXXIV Olympiad?” Especially as he contemplates retirement.

Back to the Maestro of the Movies celebration at the Hollywood Bowl. It feels disingenuous to say Williams only played his greatest hits. But most of his songs are rather “hit worthy.” He conducted selections from “Harry Potter.” Some score excerpts from the film version of “Fiddler on the Roof,” which Williams adapted from the stage version. During this part of the evening, Concertmaster Bing Wang’s virtuosity on the violin was venerable.

In a July 2020 interview for the New Yorker Williams spoke about the power and connection between music and memory. He said, “It’s a little bit like how the olfactory system is wired with memory, so that a certain smell makes you remember your grandmother’s cooking [….] A similar thing happens with music. Really, at the root of the question is something about our physiological or neurological setup we don’t understand. It has to do with survival, or protection of group identity, or God knows what. Music can be so powerful, even though it wafts away and we chase it.”

I got to experience some of that connection between memory and music when Williams asked Wang to play the theme from “Schindler’s List.” As the theme progressed, I was transported back to the “Oskar Schindler’s Enamel Factory,” which I stopped by during my visit to Krakow, Poland in the summer of 2015.

It had been years since I had thought about that visit, in fact, I had almost forgotten about it. But listening to the melody resurfaced memories from that visit as well as the feeling of being connected to a real historical artifact from one of humanity’s darConcertmaster, Bing Wang (left) and John Williams (right). Credit: Farah Sosa on behalf of the LA Phil.kest chapters. It was a visceral reaction that I was not expecting from the performance.

That level of emotional intensity was not carried out throughout the rest of the evening. On the contrary, the remaining pieces were from “Star Wars,” which the audience met with cheers, applause, and lightsaber waving.

One of the pieces he conducted was Obi-Wan Kenobi’s theme from the eponymous new Disney+ series. Williams recounted that he neglected to write a theme for Alec Guinness’ Obi-Wan in the original trilogy. So, when the new series was in the works, he got a call from producer Kathleen Kennedy and asked if he would write a theme for the character. This was the first time I heard the theme and while I was not able to catch all the nuances I was deeply pleased with the experience.

There was, however, a new musical experience for all those involved. During the encore of Friday’s performance, he debuted “Helena’s Theme,” which will be part of the fifth “Indiana Jones” soundtrack. He recorded some music for the film a week before and was encouraged by the director, James Mangold, to play the theme for Phoebe Waller-Bridge’s character at the Hollywood Bowl. Naturally, the audience was enthralled by the sneak aural preview, months ahead of the film’s release.

When Williams received AFI’s Life Achievement award in 2016, Spielberg said this of his longtime friend and collaborator, “Without John Williams, bikes don’t really fly, nor do brooms in Quidditch matches, and nor do men in red capes. There is no Force. Dinosaurs do not walk the Earth. We do not wonder, we do not weep, we do not believe.”

Check out the upcoming events at the Hollywood Bowl.

You can see a brief interview between Gustavo Dudamel, Music & Artistic Director of the Los Angeles Philharmonic and John Williams, along with a performance of some of Williams’ work by the LA Phil on “Sound/Stage.”