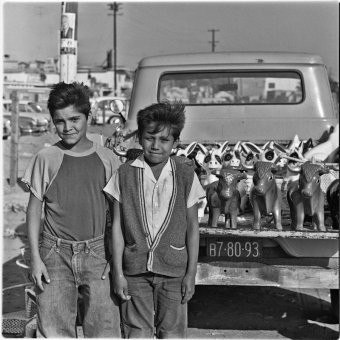 These are just some of the major events in the US from 1964.

Yet, here in San Diego, Harry Crosby, had recently quit teaching to take up photography.

In 1935, when Crosby was nine, he and his family moved to La Jolla. He graduated from La Jolla High School in 1944 and Los Angeles’ Occidental College in 1948.

After college he returned to San Diego, got his teaching credential from San Diego State University and started teaching. “First in Memorial Middle School, and then opened Mission Bay High School in ’53. And in ’58 went back to my alma mater La Jolla High School and taught the last five years there. And I quit to become a photographer,” recalled Crosby in an interview for the Bradshaw Foundation, an organization dedicated to preserving and sharing humanity’s prehistoric art online.

Crosby, perhaps better known for his work, writing multiple books on the California region as a whole; recording the history of its people; as well as the multiple rock art or cave paintings in Baja California, that before him were unaccounted for in the literature.

Still, before Crosby developed an affinity for the Californias and built a prolific career as a Baja California photographer and historian, he had to start somewhere. So prior to him documenting historical pieces, he was documenting everyday life. And where better to begin a journey into Baja California than in the most northwestern part of Mexico, the city whose motto is “where the homeland begins,” (i.e., aquí empieza la patria) Tijuana, Mexico.

Heath Fox, Executive Director of the La Jolla Historical Society, said Crosby “was on assignment for a magazine called the California Review,” a publication which has since gone out of circulation. The assignment was “to photograph the city of Tijuana in 1964.

“[Crosby] took hundreds of photographs in the couple of weeks he was there. And he took photographs of everyday life,” said Fox. These photographs cover everything from the city’s architecture to people shopping to children playing to “families standing in front of their homes. And all the sports activities and street vendors… A wide variety of what life was like in the mid-1960s in Tijuana.”

In the nearly 56 years since these photographs were taken, they have never been on display in San Diego. Until now.

The exhibition titled “Tijuana 1964: The Photography of Harry Crosby,” will feature around 60 photographs of a regular day in 1960s Tijuana, all of which make their first public appearance in San Diego.

After this assignment capturing the minutiae of life, Crosby went on to record part of the history of Baja California.

Anyone who has lived in San Diego long enough has heard at least one story about going to Tijuana. These stories range from the savory to the unsavory, in the full extension of the word. However, many San Diegans have not had the opportunity to visit our neighboring city down south.

Even rarer is the opportunity to see what Tijuana was like previously. This exhibition allows visitors the rare opportunity to look into the past, no time machine necessary.

Often the past is forgotten because it is not properly documented.

The 1960s in the U.S. do not fit that description. After all, almost everyone who was alive at the time remembers where they were when President Kennedy’s untimely death was announced in November 1963; or when Neil Armstrong and company landed on the moon in July 1969.

These moments get imprinted in people’s mind, the collective consciousness, and the fabric of life. These moments are well documented, as they should be. These moments were turning points in history. Life would never be the same after them.

While historic moments are important, their importance is marked by their rarity. Oftentimes the things that truly make up everyday life are likely less memorable and perhaps less impactful. Yet, the fabric of society and life overall is made up of these moments.

Because when all is said and done, life is made out of trivialities and small things often overlooked. Like, a child playing on the street, people walking through the shopping center or a man reading a newspaper.

Who better to remind us, than the man who saw it all, Renaissance man Harry Crosby. La Jolla’s longest resident.

The exhibition will run from February 8 through May 17, 2020 at the La Jolla Historical Society Wisteria Cottage Gallery, located at 780 Prospect Street, La Jolla, CA 92037. Admission is free and the gallery is open to the public Wednesday through Sunday from noon to 4 p.m.