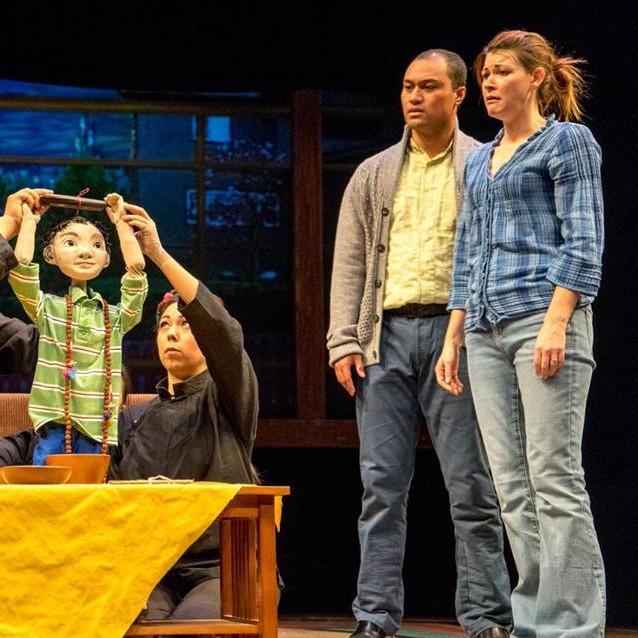 The Oldest Boy: On Puppetry and Parenting

In 2015 America, a mother’s parenting style can be as dearly held and staunchly defended as her religious beliefs – sometimes more so. It is not often that a mother is asked to choose between her religion and her motherhood values – as is the case in San Diego REPertory Theatre’s production of Sarah Ruhl’s “The Oldest Boy.”

The San Diego REP’s creative team, as they always do, mounted the story of another world with their reputation for spectacular visuals. Composer Michael Roth and sound designer Kevin Anthenill’s transformative music and use of percussive elements throughout the production creates a sense of other-worldliness that suspends even the staunchest atheist’s beliefs as this beautifully told story unfolds.

Boiled down to a familiar role and single identity, the effervescent Amanda Sitton stars as “Mother,” a Caucasian woman (as is the playwright) who fell in love with and marries a Tibetan man. At the start of the play the she is in her third year of raising their son Tenzin utilizing attachment parenting – a parenting philosophy based around the concept that a child who forms a strong emotional bond with its caregivers is a happier child over the course of its life. In action it can include sharing a bed with your child or carrying them until they express readiness to sleep alone and walk themselves.

So you can imagine the turmoil – beautiful, raw realism from Sitton that stilled the entire theatre – when monks inform Mother that her toddler is actually a reincarnated Lama who must be taken away from her before age five for lifelong study.

The stunning colors in set designer Sean Fanning’s work adds a mysticism to an age old question we all face each day. What do we hold most dear? Do we champion what we believe in as parents and individuals, or what our religious beliefs and partner’s religious beliefs’ prioritize? Do we wish to be the puppeteer or the child of God, the puppet, or the parent?

As usual, Sarah Ruhl offers to only suggestions to answering to these questions, while establishing a framework for a beautiful discussion before you. Take your parental partner, your friends with or without children and make reservations to enjoy Downtown’s dinner destinations for a late night meal afterwards because this is a play and final scene that requires some digestive conversation and what would you do?

REP Artistic Director Sam Woodhouse tells this story in the same spirit it was written. Famously poetic, Sarah Ruhl challenges the Western audience and the creative team to consider a new world where tea and values are presented differently. It is a story that feels it could only ever be told as a play; with the richness of Tibetan music, dancing, and deeply-held beliefs cast a spell of other-worldliness. The stakes of a decision most mothers will never face is beautifully reflected in the spoken word monologues and each addition to the poem to create a chanting cadence so different and patient than our own. In Buddhist teachings it is said that at in one life or another, every being has been our mother. Regardless of your stance on that, San Diego REP provides every audience member the illumination of being Tenzin’s mother, for two hours, in this life. Showing until December 6, 2016. Do not miss out. www.sdrep.org