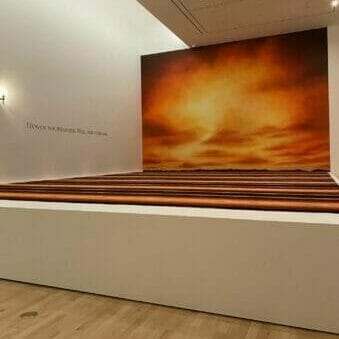 This may be the first year of the new Museum of Contemporary Art of San Diego at La Jolla but it’s clear that celebrating rule-breaking women artists is a major theme. From the inaugural show of Niki De St. Phalle’s enormous, colorful Nana sculptures and paintings, MCASD now invites you to the more intimate works of another arts icon: Alexis Smith.

The show is titled “Alexis Smith: The American Way” with the title borrowed from one of her works that coyly includes excerpts cut from the news, magazines and ads.  “The American Way” retrospective exhibition includes 50 works spanning the artist’s career, including early artist books and intimate story collages to powerful wall paintings and room-sized installations.

Smith focused on collaged works that mix high literary references with low pop culture. Always, there are sly digs at a macho society where women are objectified and a consumer society where everything is for sale.

Show curator Anthony Graham noted this is the first exhibition of Smith’s Works in 30 years. Graham is a huge fan who realized he loved returning to her works again and again as he kept learning and seeing something new, describing the artist as “intriguing and enigmatic.”

“Excitement and ambiguity is central to her work,” said Curator Graham. “Smith exposed cultural stereotypes and cliches through playful yet subversive views of women and society.”

Many of the works consist of multiple panels that tell stories through typed phrases culled from authors as diverse as Jack Kerouac and Mark Twain mixed with pop images torn from contemporary media from Jayne Mansfield to Alfred Hitchcock. For me, one of the pleasures of wandering the exhibit was in finding–and recognizing– these references either tucked or emblazoned into each work.

Several works are wall-size collages and murals, most notably the oversized visage of Marilyn Monroe, garbed in a scarf and sunglasses.  Titled “Men seldom make passes at girls who wear glasses,” the piece nods to Dorothy Parker’s famous epigram. However on closer inspection, we see clever imagery inserted into each sunglass lens.  Who is making a pass at who might be a subtext!

Another large-scale work is the “Red Carpet”. An enormous, 35 foot, multi-color serape backs up to a wall mural that picks up the carpet’s burning colors, creating almost a hellscape of color.  After our recent San Diego heat wave, you could actually sense the searing heat of our Western desert climate.

My favorite piece has to be “Starlight.”  A local muralist recreated the train image that previously graced a public bank.  On it are framed collages that evoke the train’s windows.  Each “window” has a little story of its own including one paying homage to a certain famous director who always put himself in the picture!

Hollywood and Los Angeles are frequent themes for Smith who was born in Los Angeles and lived there throughout her career. Many of her works, like Hollywood movies themselves, involve archetypal stories such as those where the hero falls in love or where the starlet dies. Movies are a constant inspiration for Smith. Scraps of film dialog and plot lines can be found throughout many of her works.  Visitors are often not not just looking at her works but reading them!  As curator Graham noted, you can visit a work of Alexis Smith more than once and each viewing provides another insight, another discovery.

Head on down to the Museum’s spectacular location across from the beaches of La Jolla and experience an afternoon of cultural immersion indoors and refreshing ocean vistas outside!

“Alexis Smith: The American Way” is open from  September 15- February 5, 2023.  Numerous special events are scheduled throughout its run for adults and children. To obtain tickets or for more information on museum hours, this exhibit and upcoming events, go to www.mcasd.org  The museum is located at 700 Prospect Avenue in La Jolla.