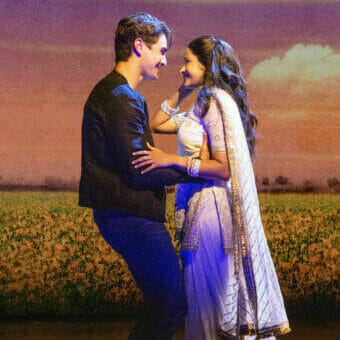 Come Fall In Love…with the joyful, love-conquers-all musical from prolific storyteller Aditya Chopra. The Old Globe and Yash Raj Films proudly present Come Fall in Love: the DDJL Musical with all the dazzling spectacle an audience can hope for when Bollywood meets Broadway. This review is a rave, but that part comes after I set the stage with critical history and controversy.

The theatrical musical adaptation of the hit 1995 film Dilwale Dulhania Le Jayenge (aka DDJL) is nearly three decades in the making. Differences between scripts and casting decisions have sparked international debate accusing this production of whitewashing the Indian story.

Broadway is famous for putting a brown wig on a blonde head. The female lead, actress Shoba Narayan made headlines when she took over the role of Princess Jasmine in Broadway’s Aladdin. In the show’s seven-year history, Narayan was the first South Asian actress to play Jasmine. In 2021, Narayan told Glamour,  “I have to be so good because of these preconceived notions about what a lead looks like. That was my internal monologue: ‘Be so good they can’t ignore you’.”

The talented Narayan is impossible to overlook – and one year later, her sentiment is set to a song. While playing Simran, the female protagonist of Come Fall in Love, she belts out: ‘I have to be twice as good to get half as much.’ Thus, the controversy: only half of the cast and half of the leading couple are South Asian.

In the movie, the star-crossed lovers overcome cultural differences with a traditional Indian girl meeting a non-resident Indian boy, but in early iterations of the story, Indian filmmaker Aditya Chopra imagined a Caucasian male lead, claiming he even considered casting Tom Cruise.

As the director and a producer of this new musical production, Chopra stands by the decision to return to his first vision, saying, “The most powerful way to depict a country’s culture and values is to see it from the perspective of someone who does not belong to the same culture. That is the starting point of Come Fall In Love, the story of Indian Simran, her culture and heritage through the eyes of American Roger.”

In 2022, Chopra swaps Raj for Rog, a Boston boy reminiscent of an Abercrombie ad, from side-swept hair to spray-tanned abs. If Austin Colby felt he had something to prove, the motivation is well-harnessed. He took online haters and objectification on the chin, levitating through dance numbers and channeling sincere sweetness within scenes. He almost matches pipes with the unbeatable Narayan when reprising her ‘I want’ song, Maybe Love. His first song is titled Party and Spend Daddy’s Money, yet I had to root for Colby’s Rog, due to his comedic timing, mastery of movement, and the couple’s unmistakable chemistry. The duo earned seconds of sustained cheering whenever their characters reunited.

The book’s bouncy banter is textbook romantic comedy but fresh thanks to a winsome couple and smart supporting characters – plus dashes of feminism. Chopra’s movies are famous for titillating giggles, but Nell Benjamin has her hands on the wheel too. The Laurence Olivier Award-winning writer of Legally Blonde and Mean Girls delivers her trademark wit while posing a couple of questions regarding privilege, race, parenting, and caste. The show is Pride & Prejudice meets Guess Who’s Coming to Dinner meets EuroTrip, elevated by the bright music of Vishal Dadlani and Sheykhar Ravjiani.

Vishal and Sheykhar are rightfully referred to as the “architects of modern sound in Bollywood.” While the musical melding of America and India (courtesy of an 11-member orchestra) coalesces well in Act II numbers like Never Be Enough and Can’t Put a Ring on it (‘Til You Dance), it was a predominately Western sound in Act I. The first half was set throughout America and Europe, and choreographer Rob Ashford (Frozen, Thoroughly Modern Millie) continually impresses, but the audience responded enthusiastically to musical nods to the original score and Shruti Merchant’s Indian dance numbers.

Similarly, the story could do away with Roger Mandel, Sr. (Rog’s neurotic dad) in the second act to focus on the strong marriage between Simran’s father and mother. While Rog’s mom, Minky, is a fun and integral character, it could better honor the tradition of Indian matchmaking to let go of a rushed, apparently-happy ending for the Western WASPs. I add this because, at a two-hour and forty-minute run time, a cut or two would not hurt; though I grinned through all 160 minutes.

Regardless of what changes between this West Coast run and an East Coast future, I predict the role of Simaran’s mother, Lajjo (Rupal Pujara), sees award recognition. Her solo I Give You the World brings gorgeous gravity.

Come Fall in Love is one of the few shows which I immediately purchased tickets to see again (my first comment after curtain call was “I am bringing my mom to this one!”), and found some performances are already sold out. I recommend musical fans catch it before it closes on October 16. From the dreamy opening dance number, So Far, to the aww-worthy ending of Holi Hai, contagious delight spills off of the stage until the entire theater is united in love.

eeens program. The play runtime is approximately two hours and forty minutes with one intermission.