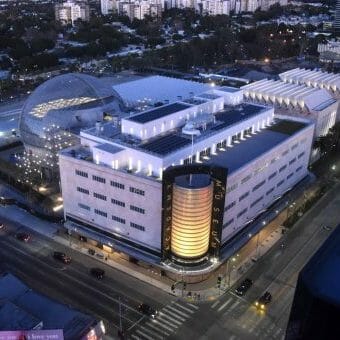 Dawn Hudson, CEO of the Academy of Motion Picture Arts and Sciences notes: “The dream of building a museum dedicated to movies has been 90 years in the making for the Academy”. Since 2012 when the Academy hired Renzo Piano Building Workshop as architects to build the museum, there have been collaborations of hundreds of leaders in the area of film, culture and education, non-profit specialists, scholars, curators, programmers, community builders, archivists, and Academy members. All have worked together to create the world’s premier movie museum in Los Angeles, the global center for moviemaking.

The 300,000 square foot museum campus features two buildings, a renovation and expansion of the May Company(built 1939), and a soaring glass spherical structure added to the north, featuring a terrace with broad views of the Hollywood Hills. Included in the buildings are theaters and exhibition spaces as well as a museum store offering film-related merchandise, and Oscars memorabilia designed exclusively for the store; and Fanny’s, a two story restaurant and café, named after Fanny Brice, the legendary theater and movie, vaudeville, and radio star of the 1920’s.

The seven-story museum includes a 30,000 square foot core exhibition space spanning three floors: Stories of Cinema offering celebratory, critical and personal perspectives on the impact of moviemaking past and present, a temporary exhibition of acclaimed filmmaker Hayao Miyazai, his first museum retrospective in North America in addition to Studio Ghibli.  Other offerings are: The Path to Cinema: Highlights from the Richard Balzer Collection, which are selections from the world’s foremost holdings of pre-cinematic optical toys and devices, Backdrop: An Invisible Art a double height installation that presents the painting of Mount Rushmore used in Alfred Hitchcock’s North by Northwest (USA 1959), and The Oscars Experience an immersive simulation that lets viewers imaginatively step onto the stage of the Dolby Theater to accept an Academy Award.

The Academy Awards History galleries are in a circular gallery of 20 historic Oscar trophies and wins, moving into an historical walk-through from 1929 to the present, displaying the origins of the Oscars and the Academy, memorable wins and infamous snubs, Oscars fashion, and wraparound screens showcasing significant acceptance speeches. There is also the Directors Inspiration Gallery currently featuring the director Spike Lee’s personal collection of objects, considering his creative process and inspirations for his most iconic titles, the Story Gallery which includes screenplays and storyboards from seminal films, also highlighting the disciplines that brings a story to life – screenwriting, casting, make-up design, costume design, production and sound design, special effects, acting, directing, producing and more.

There are a series of galleries dedicated to components of film artistry including a Performance Gallery, Sound Gallery, and Identity Gallery. And another gallery Impact/Reflection which explores how documentary and narrative film can ignite cultural change, structured around four social impact areas: Black Lives Matter, #MeToo, labor relations and climate change. There are also the Animation, Effects and Encounters Galleries, each highlighting the history of animation, special visual effects and the artistry that brings the worlds of sci-fi, fantasy and horror to life, as well as a Composer’s Inspiration Gallery.

The museum will have a roster of movie screenings (including Oscar Sundays and Family Matinees) presented in its new 1000 seat David Gefen Theater and the 288 seat Ted Mann Theater. There will also be ongoing education and family programs taking place throughout the museum in exhibition galleries, theaters and the Shirley Temple Education Studio including: teen programs, family studio activities, and school tours.

The Academy Museum of Motion Pictures is destined to become one of Los Angeles’s greatest destinations for entertainment, education and inspiration.

There are many grand opening festivities and offerings in October with ticket information all found on the museum webpages: https://www.academymuseum.org/

All images courtesy of the Academy Museum of Motion Pictures.